Patterns follow us everywhere, creating an intricate map as we travel through our days, affecting us in ways, often imperceptible but fundamental. Our life patterns keep us organized and balanced, but patterns of design offer an entryway to color, texture and interest as we integrate patterns into our homes. Most patterns have been around for centuries and have evolved into inspiring interpretations for us to transform into our personal style.  Add these patterns to embellish your decorating style. 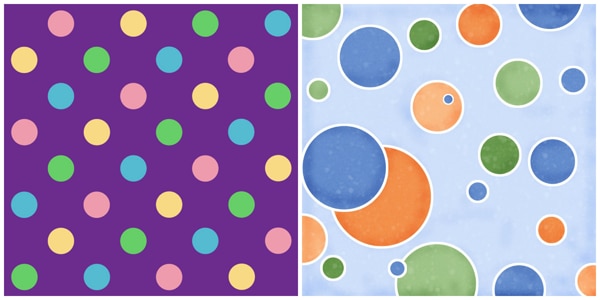 Polka dots comprise a pattern of an array of filled circles, traditionally of equal size and spaced close together; however, today’s designers blast polka dots in every way imaginable.  Many theories abound as to the history of polka dots. The “polka” dance was popularized in the l9th Century and its bouncy, jumpy steps mimic the polka dot pattern. The word polka actually means a “Czech woman”.  Some say that Walt Disney created the polka dot craze when he was designing Minnie Mouse and a blob of ink fell on her red skirt and Walt declared the polka dot his invention.  In 1926, Miss America was photographed wearing a polka dot bathing suit and in the  l940’s, Christian Dior revolutionized women’s fashion with “The New Look” with a collection full of polka dots and in 1960, the infamous song, “Itsy Bitsy Teenie Weenie Polka Dot Bikini,” hit number one on Billboard’s Hot 100 songs.  No wonder that polka dots continue to be an integral part of our culture as an ever evolving decorative element.  Polka dots have found a new zest as a modern, energetic and classy pattern. 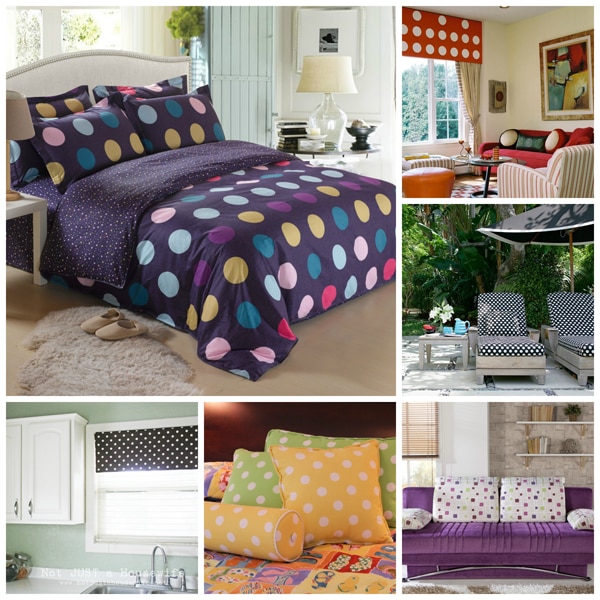 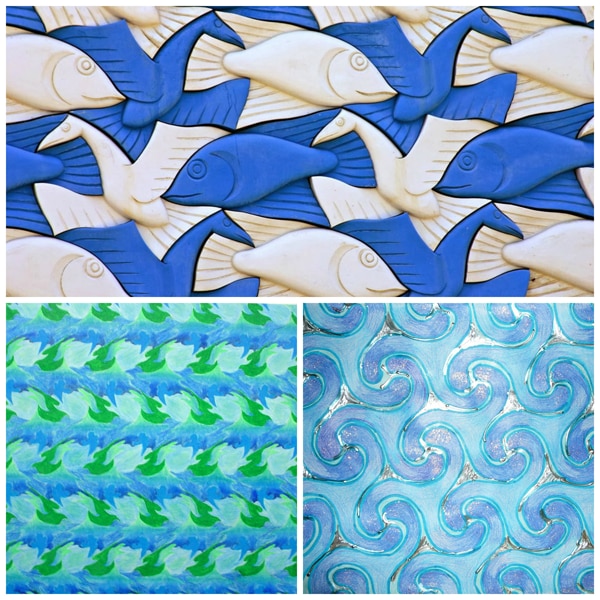 A tessellation pattern is composed of one or more geometric shapes that do not overlap or gap and the shape is repeated over and over; all the corners should meet and no lines can lie along another line. The word, “tessera,” is a Latin word that means a small stone cube which was used in mosaics by the Sumerians about 4000 B.C. and in many historical Roman buildings. This pattern entered the design world as a “tiling” pattern of symmetry. An easy way to think of this pattern is in its naturally occurring form of the honeycomb that bees make.

M.C. Escher was a master of tessellation designs that were mathematically precise, but in home decor, this pattern is simplified with whimsical and fun geometric shapes. A tessellation pattern is full of rhythm, energy and repetition that inspires a wide range of decor possibilities, from traditional, delicate tile work to decorative quilt and textile designs, modernized as classy decor statements. 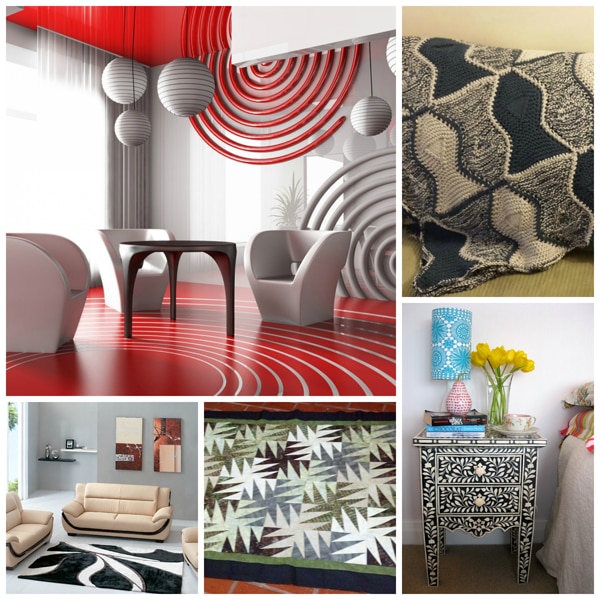 A mandala pattern derives from Hinduism and Buddhism which is a ritual symbol represented as a square with four gates containing a circle with a center point.  The word, loosely translated from Sanskrit, means circle but it represents much more than its shape as the mandala exhibits a radial balance that symbolizes  the universe and a wholeness of being that extends within and beyond ourselves. The Mandala pattern is really an integrated design organized around a unifying central point. This spiritual, contemplative pattern has always been a popular motif in Persian rugs but has been re-imagined for today’s decor as “boho chic.”

Even garden design is inspired by the peaceful mandala. 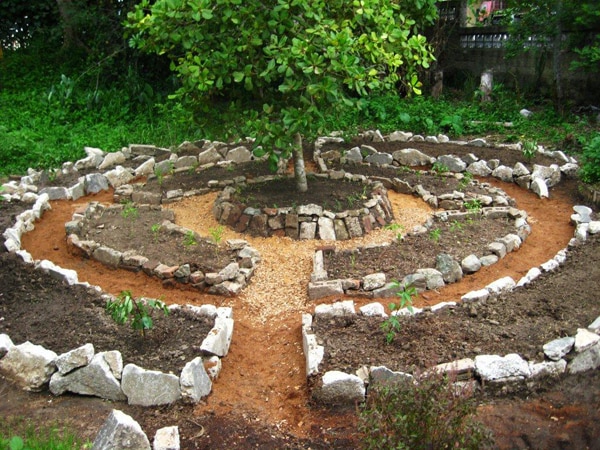 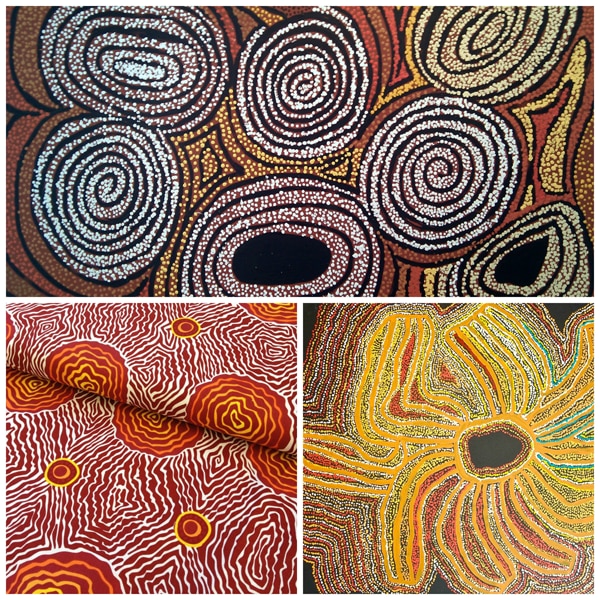 Aboriginal designs are one the oldest expression of patterns, found 30,000 years ago and are native to the Australian Aboriginals. These designs are rooted in religious rituals and are often inspired by dreams and totems and illustrate a story.  Traditionally, these abstract patterns were colored with earthy colors and rich reds, browns and oranges. Of course, today Aboriginal patterns have taken a modern twist with bright colors and exuberant patterns with all the flavor of its original sprightly, intuitive primitive designs. 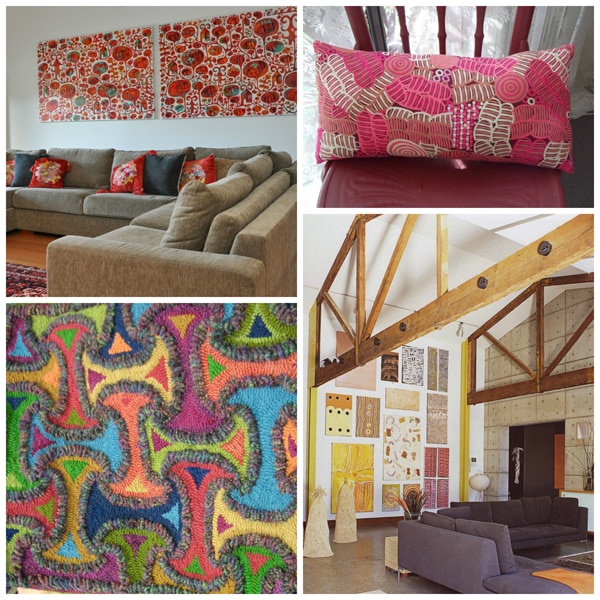 Camouflage has always been a popular pattern and adopted from the military almost immediately. Camouflage originated from the Parisian slang term, “camoufler,” meaning to disguise. The French Army in WWI, commissioned French artists to disguise artillery in the forests, using the earth colors of green, tan, black and brown to evoke the colors of the surrounding environment.  From there, the camouflage pattern has been interpreted in endless designs and colors and even given specific names for the different designs.  Today, camouflage is anything but a standard pattern and is seen in all colors, sizes and shapes and is hardly a “disguise” pattern but a loud fashion statement.

Camouflage even makes a striking garden wall, keeping watch over a patio. 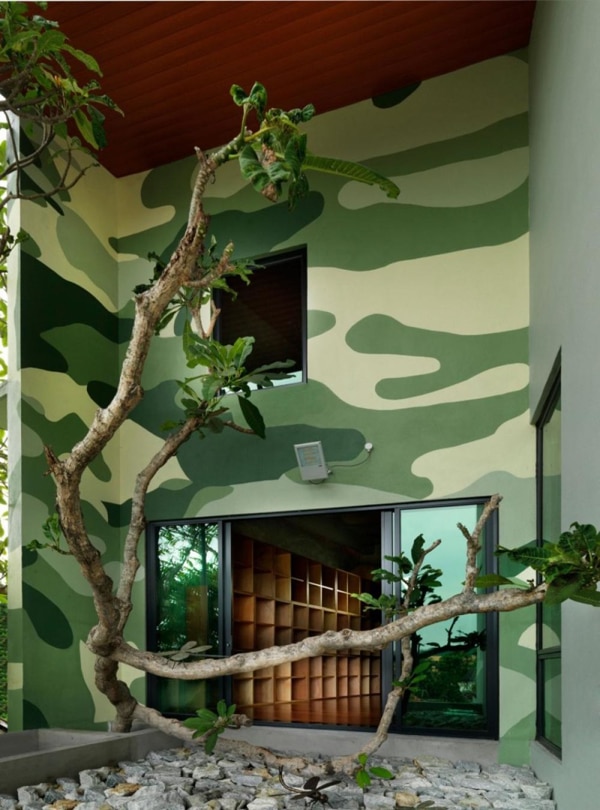 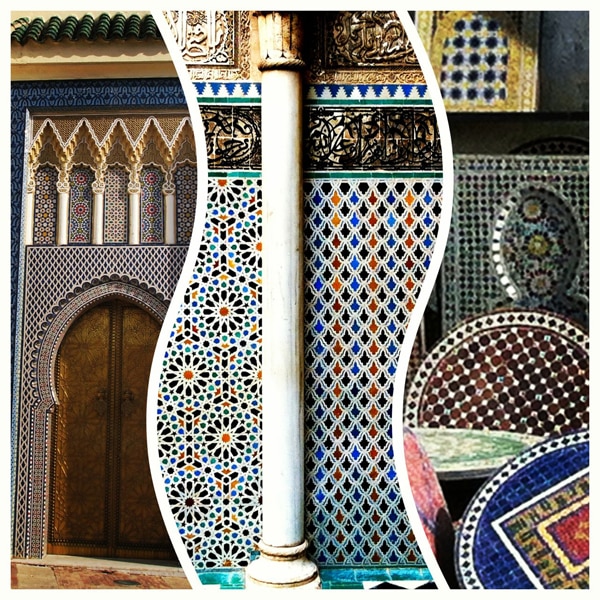 The Moroccan pattern derived from Zellige which is the terracotta tile work that is made of chips of tile arranged in a colorful geometric pattern.  The most common shape is the eight point star with a unique shape made from overlapping two squares.  Hard edges and straight lines are indicative of this pattern and is another design of balance as the star shape is a universal symbol of harmony and cosmic order. Moroccan inspired designs pop up everywhere as fanciful, exotic and expressive ways to decorate-spicy and dramatic, just like a Moroccan bazaar. 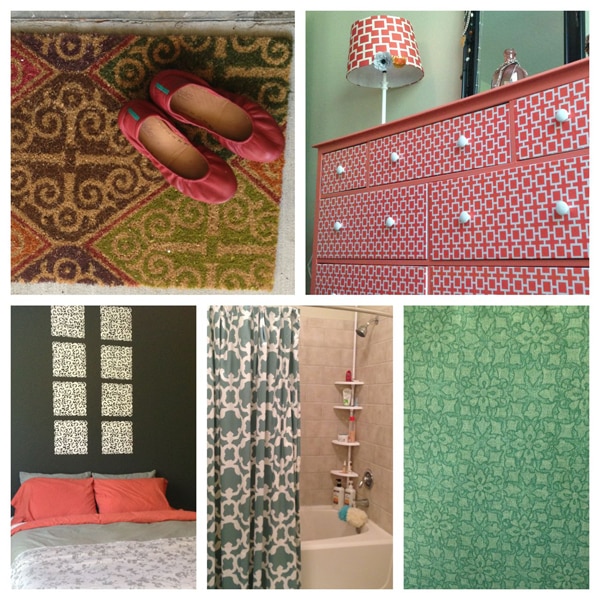 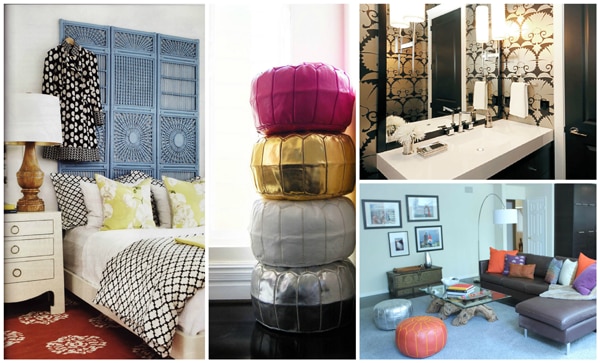 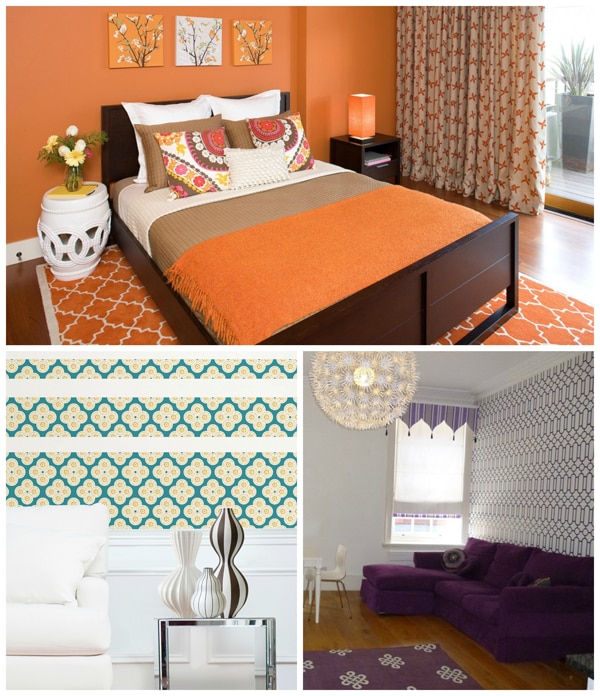 Basketweave is a pattern of two or more threads interlaced to create a checkered pattern; thus, its name which mimics the weave of baskets.  Obviously, this pattern has been around as long as two reeds or sticks or material were available to crisscross together. Basketweave derives from the Latin word: “bascauda” which means basin.  Wicker furniture and brick basketweave driveway patterns are ubiquitous but new and chic explorations of this pattern, add texture to any room, adding an organic, natural touch. 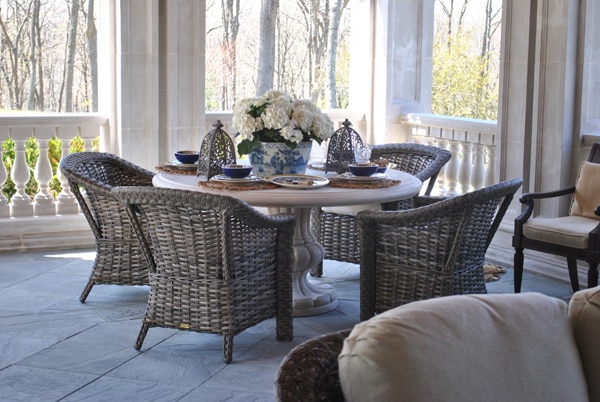 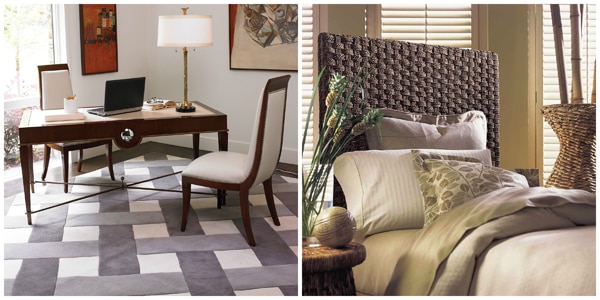 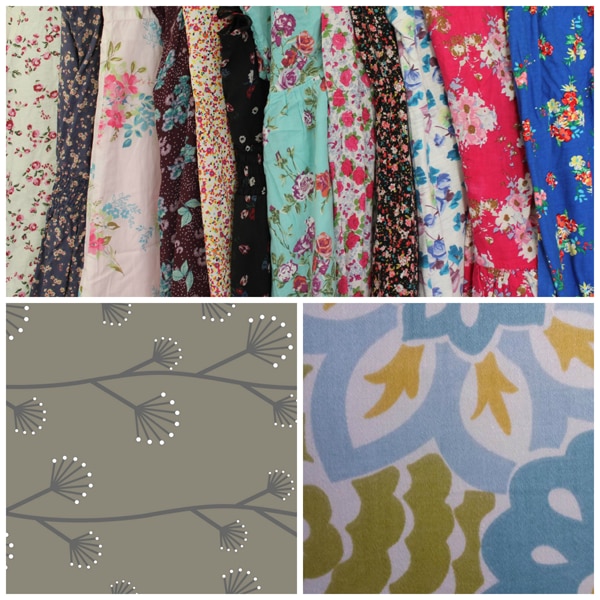 A floral pattern is simply using plant or flower designs as inspirations to create a balanced and pleasing flower pattern. Florals have been the go-to pattern for all times and come and go in design styles.  You might consider florals to be old-fashioned and stodgy, but today, florals can be linear and abstract and loaded with pops of color. Caribbean, tropical and cottage, shabby chic florals highlight the popular choices in flower patterns today. 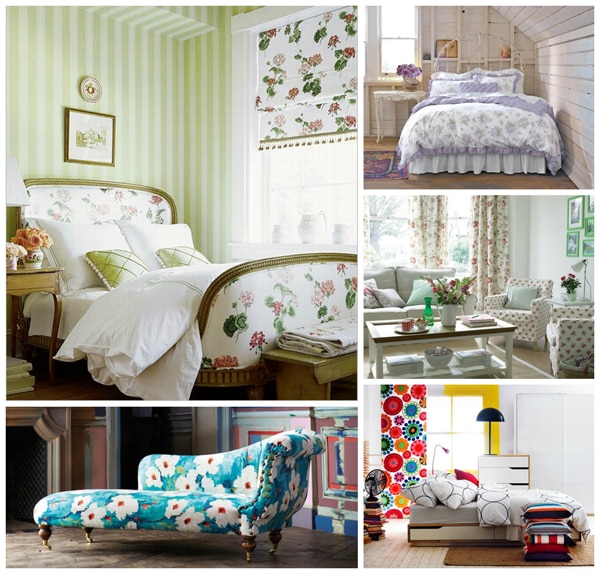 Scales or fish scales is a pattern of overlapping arcs, sometimes called clamshells.  This is an Asian inspired design that suggests the scalloped shape of fish scales and is a versatile, clean, geometric shape that fits in any style.  Fish Scales also has a hint of the art deco and often pops up on pillows to accent couches and armchairs. This pattern has boundless energy of repetition and is becoming a favorite pattern in home decor. 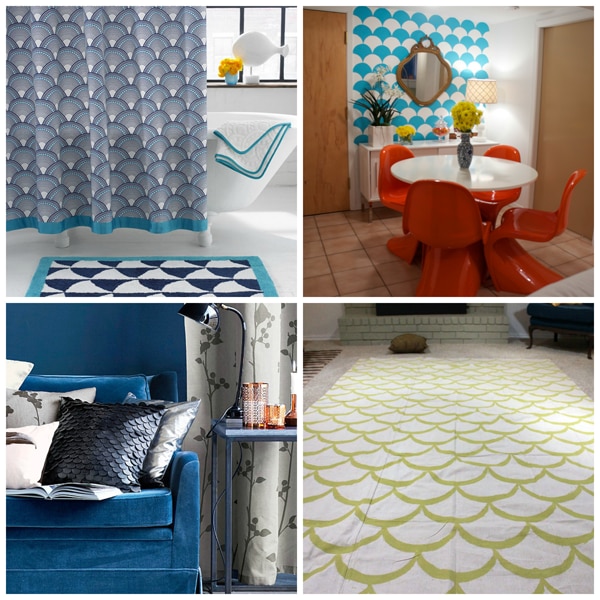 Lattice is a design arranged in a crisscross pattern creating a diamond shape with spaces in between (think lattice pie crust or a lattice fence). The traditional lattice diamond shape has now been bent out of shape for a more modern and contemporary feel. Lattice patterns grace our homes with many moods. We always love lattice. 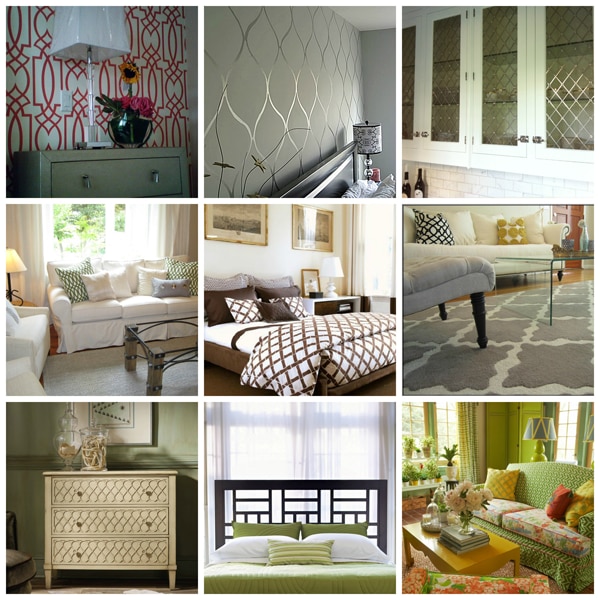 You can see that these traditional and historical patterns continue to make a lively appearance in our homes. Wave the pattern banner any way you choose to declare your personal style. 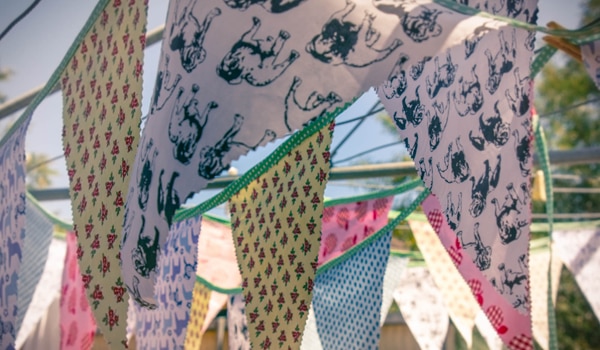