Roman Shades are soft fabric window treatments that hang flat against the window when in the down position but fold up neatly and crisply into horizontal folds when raised. For the ultimate ease of operation, a motorized option is always available and highly recommended. A basic Roman Shade simply results in evenly-sized horizontal folds falling down the window. Roman Shades are usually constructed with a series of horizontal bars to create the gentle folds, with eyelets and cords on the wrong side to draw the shade up. Do be aware that if you do not choose a liner or you select a sheer fabric, the cords and drawstrings will be visible from the outside of the window. Do not let that deter you as the beautiful undulating ripples of these shades create a light mood to offer many style opportunities. 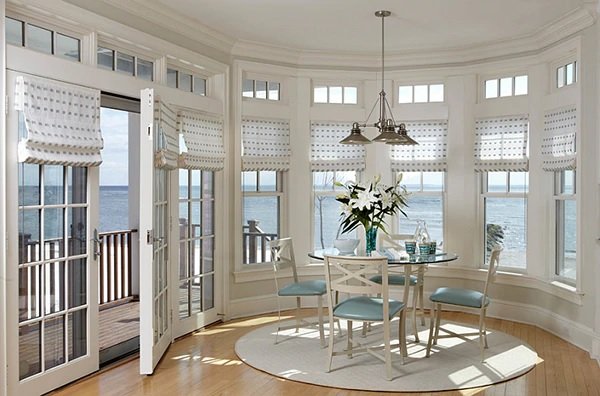 You might wonder why these shades are called Roman Shades. History tells us that Roman Shades go back to Rome’s famous Coliseum, the ancient and spectacular arena where opulent and often violent events were staged for the crowds (remember the classic movie, “Ben Hur”). This popular venue (like our sports arenas and open-air rock concerts) was bathed in the bright Mediterranean sun and archeological excavations did discover a system of retractable fabric shades that could be drawn over the Coliseum. Rome was famous for installing fabric coverings in many public places and homes to protect and shield the spectators from the bright hot sun. Although this grand and luxurious shade was unlike our Roman Shade of today, the arrangement of ropes and pulleys is reminiscent of the flowing motion of modern Roman Shades. Window treatments have been around as long as people have needed privacy, light protection and security.

Flat Roman Shades are made of a continuous piece of fabric and hang flat against the window and are made of horizontal fabric panels backed with sturdy bars to strengthen the shade. This style is more rigid and offers a structured look and is perfect if you love patterns so the design remains uncluttered and pristine. Flat Roman Shades give a clean and tailored look, yet the appeal of a soft fabric adds a depth of design. The unique folds still tuck in tightly at the top of the shade, resulting in those gentle curves at the window stack, creating the look of a valance. Flat Roman Shades do have extra fabric, which adds some room darkening and their slim profile is a bonus for French doors and shallow windows. Be advised that the folds may not raise perfectly straight and I like them when used in rooms where the blinds can be styled in the up position. 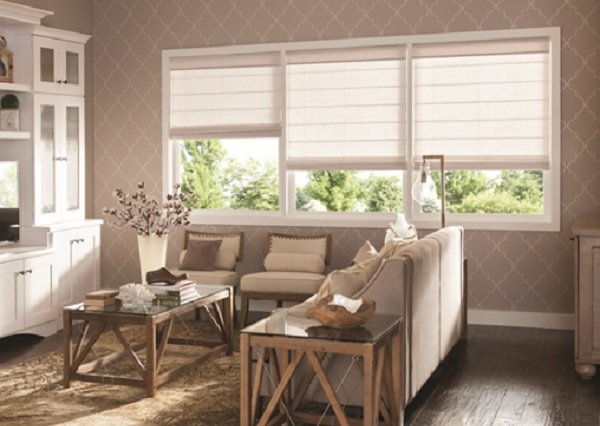 Soft fold Roman Shades are also called looped or teardrop or hobbled, but are distinctive as the fabric cascades in a rippling effect all the way down the window. This style retains the loose folds in both the raised and lowered position. Soft fold Romans add an informal aura and can create a romantic mood and airy feel or can be styled in a more traditional manner. Since these Romans are constructed with permanent folds and retain the folds when open, many of us think of this style when considering a Roman Shade. Soft fold Romans lend a formal, more traditional look and continue to be one of our most popular decorative styles, which portray the “Roman look” when the shade is lowered. 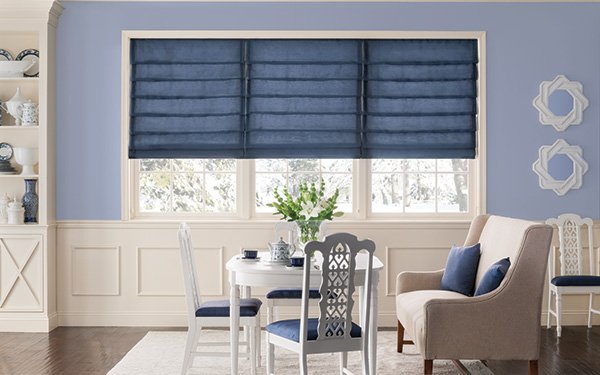 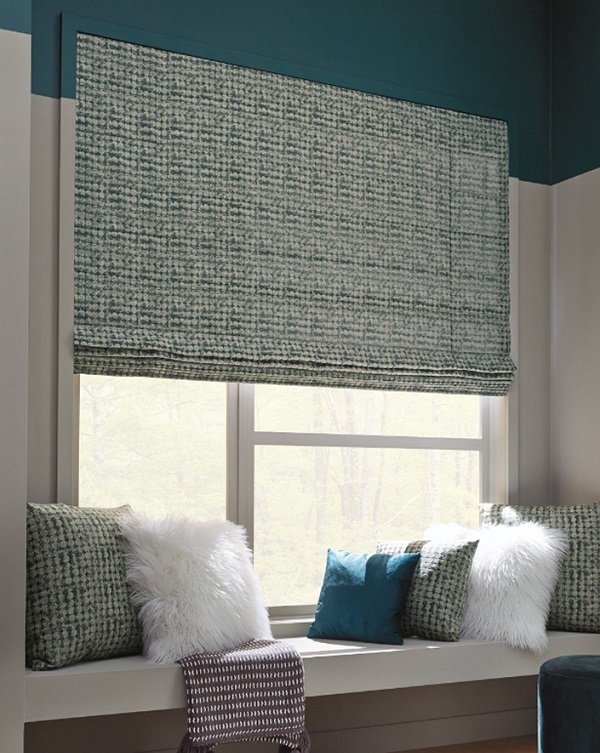 Roman Shades can really change the look of the room as so many fabrics and materials in a rainbow of colors, patterns, liner or no liner, the addition of drapery or a valance, which all combine to create a unique look, specially suited for a particular function or just for pure décor. Roman Shades are so fashionable and display an incomparable character to a room. Let’s take a look at the many ways a Roman Shade can lend flair to your home.

By designing window treatments in bold color, a room is instantly upstyled with a vibrant impact. Additional repetition in the same color on pillows or other accessories, increases the brightness of this décor. 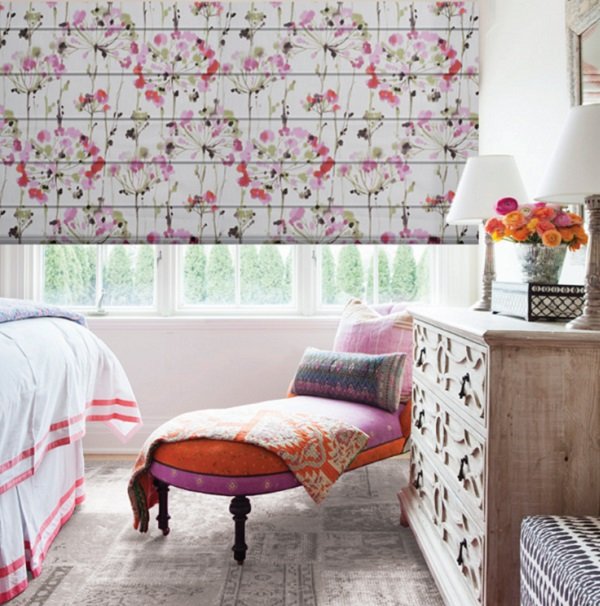 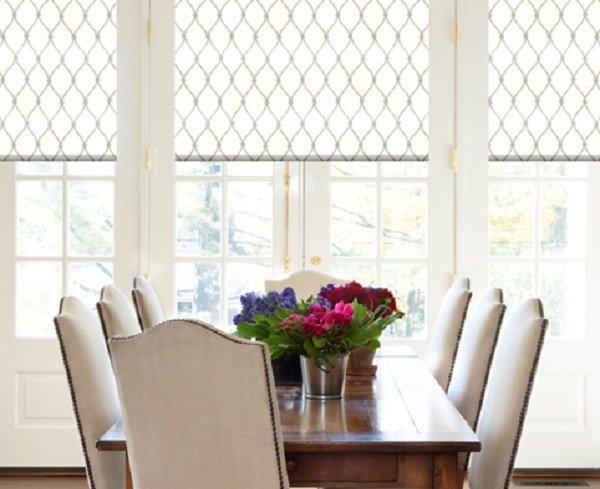 If you lean into romantic, fanciful décor, the Balloon Roman Shade adds drama and a particular panache to windows. Deep inverted pleats “pouf out” when the shade is raised. My advice is to use these shades only as a decorative top window treatment.

Traditional Roman Shades are the most functional for simplicity and casual elegance. When these shades are raised, a soft raft of material is formed and when lowered, gentle folds cascade down the window.

For an “over-styled” look, whether for fashionability or for function, Roman Shades paired with drapery continue to be a popular window treatment duo. More privacy and light control is achieved with this look. 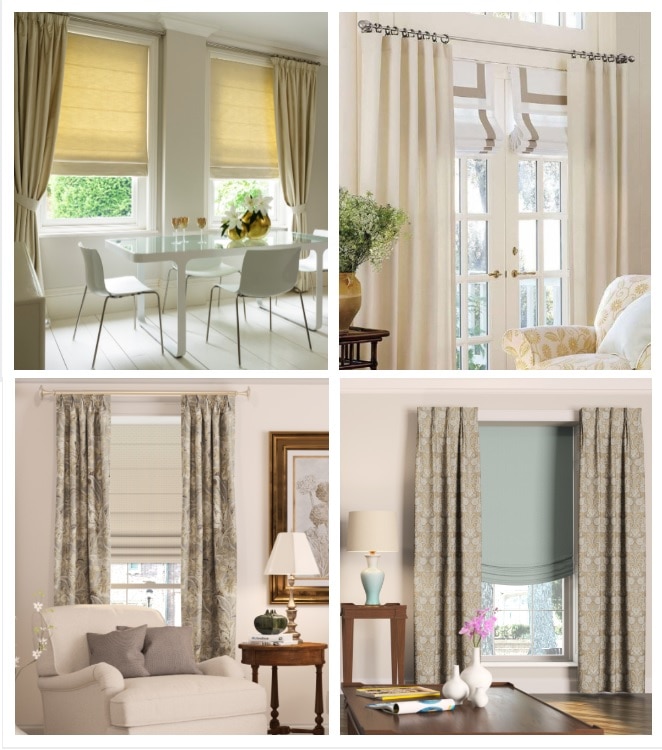 Roman Shades continue to set trends in window fashion and complement the most elegant or simplest decor. 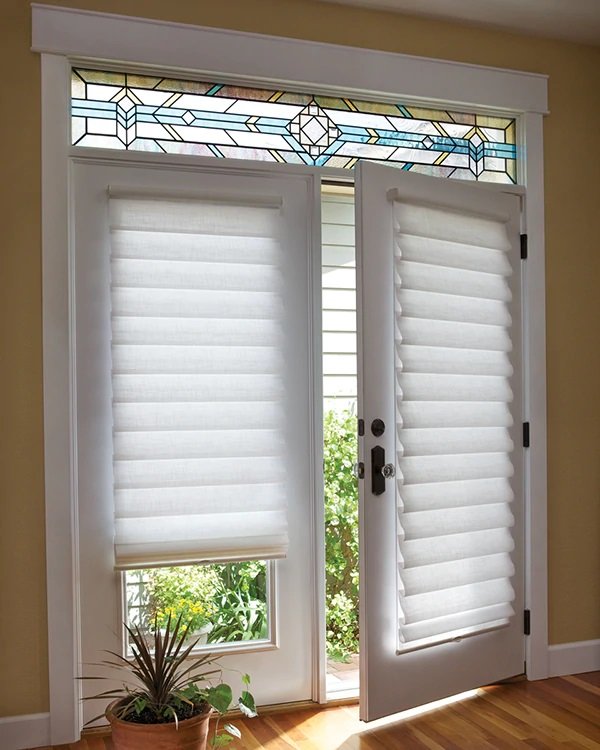